When the Egyptians conquered northern Sudan (Kush Upper Nubia) in the early Eighteenth Dynasty (ca. 1504 BCE), they identified Jebel Barkal as the birthplace and chief southern residence of their state god Amun. As part of their program of conquest, they established the cult of Amun in many places in Nubia, but Jebel Barkal seems to have had a unique importance for them as a creation site and home of a primeval aspect of Amun who renewed life each year with the Nile inundation. Beneath the Jebel Barkal cliff the Egyptians constructed a major religious center and gave it the same name as Karnak (Ipet-Sut), Amun’s great sanctuary at Thebes, some 1250 km downriver 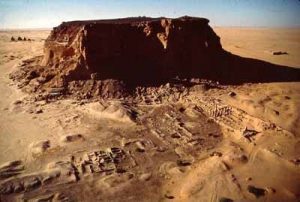 The Egyptians called the hill variously Dju-Wa’ab (“Pure Mountain”) and Nesut-Tawy (“Thrones of the Two Lands.”) (which in Dynasty 25 and the Napatan Period sometimes became Neset-Tawy [“Throne of the Two Lands”]). The settlement which grew up around it they called Napata, which became the southernmost town in their African empire.

Jebel Barkal’s most distinctive feature is the colossal free-standing pinnacle on the south corner of its cliff. This towering monolith, unparalleled in the Nile Valley, was anciently perceived as a gigantic natural statue with many overlapping identities: a rearing uraeus serpent, a phallus, a squatting god (or several), and, depending on the direction from which it was seen, a vague human form crowned with a sun disk or a White Crown – or perhaps even a Red Crown or Double Crown. Most conspicuously in public art it was interpreted as a uraeus, wearing the tall, knobbed White Crown. Because the uraeus, worn on the front of the the king’s crown, was the primary symbol of Egyptian kingship, and because the White Crown was the symbol of royal hegemony over Upper Egypt (or “the South”), the pinnacle on Jebel Barkal apparently “proved” to the Egyptians that the mountain was an original source of their “Upper Egyptian” kingship and that this kingship, granted by Amun of Jebel Barkal, included all of Kush.

I don’t want to go. Sweet, maybe… Passionate, I suppose… But don’t ever mistake that for nice. There’s something else I’ve always wanted to say: Allons-y, Alonso! You can spend the rest of your life with me, but I can’t spend the rest of mine with you. I have to live on. Alone. There’s only one time I could… New-new-Doctor. …