Located to the west of the temple of Amun is the temple of Apedemak (or the Lion Temple). Apedemak was a lion-headed warrior god worshipped in Nubia. The god was used as a sacred guardian of the deceased hereditary chief, prince or king. Anyone who touched the chief's grave was said to be cursed by this Apedemak. 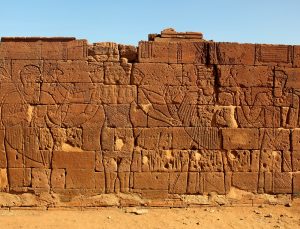 The temple is considered a classic example of Kushite architecture. The front of the temple is an extensive gateway, and depicts Natakamani and Amanitore on the left and right exerting divine power over their prisoners, symbolically with lions at their feet. Who the prisoners are exactly is unclear, although historical records have revealed that the Kushites frequently clashed with invading desert clans. Towards the edges are fine representations of Apedemak who is represented by a snake emerging from a lotus flower. On the sides of the temple are depictions of the gods Amun, Horus and Apedemak keeping company in the presence of the king. On the rear wall of the temple is the largest depiction of the lion god, and is illustrated receiving offering from the king and queen. He is depicted as a three-headed god with four arms. The north-front shows the goddesses Isis, Mut, Hathor, Amesemi and Satet. Inside the temple is a carving of the god Serapis who is depicted with Greco-Roman style beard. Another god with a crown is depicted but is unidentified, but believed to be of Persian origin.

Although the architecture of the main Apedemak temple is strongly influenced by Ancient Egyptian architecture, exhibiting some classic Egyptian forms, some of the depictions of the king and queen are fine examples of the differences between Egyptian and Kushite art. King Natakamani and Queen Amanitore are depicted with round heads and broad shoulders, with the relief of Amanitore having unusually wide hips, which is more typical of African art. So the temple of Apedemak illustrates profoundly the fusing together of artistic influences by the Kushites, especially when taking into account the nearby Roman kiosk which clearly is influenced by Ancient Greece and Rome (as discussed below). The depiction of Apedemak displaying a lotus flower is also somewhat unusual, and initially led early archaeologists of Naqa to speculate that the temple had Indian influences, given that trade routes from India led to the ancient Red Sea port of Adulis, in modern-day Eritrea. These connections are still being explored by modern archaeologists.

END_OF_DOCUMENT_TOKEN_TO_BE_REPLACED

You’re a good guy, mon frere. That means brother in French. I don’t know how I know that. I took four years of Spanish. I figured out a way to make money while I’m working! What’s gotten into you? Have you been eating cheese? Hahahahah! Turns out he ended up getting too friendly with the teddy bear. Cinque Terre, Italy …

END_OF_DOCUMENT_TOKEN_TO_BE_REPLACED

You know what you said about the structures becoming shackles. You were right and I can’t take it, the injustice. I mean, no one ever’s gonna know who saved the entire city. Gotham’s been good to our family, but the city’s been suffering. People less fortunate than us have been enduring very hard times.So we built a new, cheap, public …