The most extensive Nubian pyramid site is at Meroë locally known as Bajarawia, which is located between the fifth and sixth cataracts of the Nile, approximately one two hundred kilometers north of Khartoum. During the Meroitic period, over forty queens and kings were buried there. 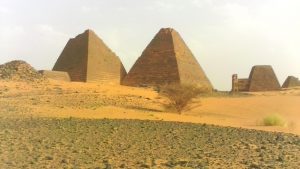 The physical proportions of Nubian pyramids differ markedly from the Egyptian edifices that influenced them: they are built of stepped courses of horizontally positioned stone blocks and range from approximately six to thirty meters in height, but rise from fairly small foundation footprints that rarely exceed eight meters in width, resulting in tall, narrow structures inclined at approximately seventy degrees. Most also have small Egyptian-inspired offering temple structures abutting their base. By comparison, Egyptian pyramids of similar height generally had foundation footprints that were at least five times larger and were inclined at angles of between forty and fifty degrees.

All of the pyramid tombs of Nubia were plundered in ancient times, but wall reliefs preserved in the tomb chapels reveal that their royal occupants were mummified, covered with jewelry and laid to rest in wooden mummy cases. At the time of their exploration by archaeologists in the nineteenth and twentieth centuries, some pyramids were found to contain the remains of bows, quivers of arrows, archers’ thumb rings, horse harnesses, wooden boxes, furniture, pottery, colored glass, metal vessels, and many other artifacts attesting to extensive Meroitic trade with Egypt and the Hellenistic world.

A pyramid excavated at Meroë included hundreds of heavy items such as large blocks adorned with rock art and 390 stones that comprised the pyramid. A cow buried complete with eye ointment was also unearthed in the area to be flooded by the Meroë Dam, as were musical rocks that were tapped to create a melodic sound.

A perfect city for exploring on foot with a shop around every corner. Much of the inner city can be walked without trouble, however, in parts walking include crowds, uneven streets, heavy traffic, and skinny sidewalks. If that’s a problem, there are plenty of taxi’s to ride in and scooters to rent. How to Travel Subway – The metro is the …

Early History Home to years of history, which stretched far and wide. Due to the characteristic weather, the earliest explorers completely bypassed the area. The first settlement in the area was founded 1770 as a mission community. In addition to the mission, a military fort was built. Upon gaining independence, the area grew quickly. The old system gradually came to …

END_OF_DOCUMENT_TOKEN_TO_BE_REPLACED

Who can resist a delicious slice of one of our home made pies? We know we can't! Out goal…

Our skatepark offers a range of modules for skateboarders of all levels. Please wear…

We have been organising sightseeing tours for the last 20 years. You're in good hands with…

Drop your phone for a day and listen to the sounds of nature..

Overconfidence, this, and a small screwdriver. I’m absolutely sorted. Please tell me I…

Described as a city within a city. An extensive range of retail, restaurants and…

Explore the city in a fun, easy, unique way – on a Segway!